Singing in the Land of Gods

Two previous choir events in Kalamata have proven: The combination of sea, mountains, vine and olive trees make Greece a place where singers from all over the world feel mostly welcome.

Hosted by the romantic city of Kalamata, located on the Southern Peloponnese this choral event combines the advantages of an international choral competition with various concert opportunities in a culturally diverse city.

Narrow lanes, a historic old town and the Apostles church of the 12th century characterize the townscape until today: Kalamata is vibrant, calm and idyllic.

The competition part offers categories for different levels of difficulty, casts and musical genres – the festival combines an easy going gathering of different nations with the wonderful setting of South East Europe.

Schedule of the Event

depending on the choir's individual schedule

If you are interested in individual excursions please send an email to travel(at)interkultur.com.

in cooperation with
the Municipality of Kalamata

Organizer is the INTERKULTUR Management GmbH.

The Kalamata Dance Megaron was constructed with funding mainly from the European Union and the Greek State, in order to house the activities of the Kalamata International Dance Centre, during the International Dance Festival, which takes place every year in July, as well as cultural events that take place throughout the year. It first opened its doors in July 2013. Every year it welcomes the dance world’s most prestigious names and, since 2015, every second year, choirs from around the world.

Kalamata Dance Megaron is a modern, multi functional hall. It has a main hall with 650 seats and a small hall with 200 seats, as well a massive foyer on the ground floor and another one on the upper floor. During the event, it is the main venue accommodating the festival office, most of the competition performances and the individual coaching sessions.

Named after the well-known film director, scriptwriter and film producer Theo Angelopoulos (1935-2012), who was originally from Messinia (the wider area, of which Kalamata is the capital), this amphitheatre, built to host seminars, concerts and workshops, opened in 2006. It is centrally located, close to the Municipal Theatre, on the main shopping street, and just a few minutes’ walk from the Kalamata Dance Megaron and the Holy Taxiarches Church. With its 250 seats and good acoustic, it is a suitable place for the competition and evaluation performances.

The Holy Taxiarches Church is dedicated to the Holy Archangels Michael and Gabriel. The church is located in Kalamata city center. Its construction begun in 1938 and it was inaugurated in 1956. Its architectural style is hellenobyzantine. Dimitrios Kentakas, a famous craftsman, painted its murals in byzantine style. This spacious church hosts the Sacred Choral Music Competition, with the permission of the Most Reverend Bishop of Messinia Chrysostomos.

The Opening Concert and Award Ceremony, will be held in Tenta Sports Hall. Tenta Sports Hall is actually a huge tent, used for various sports events. With a total of 2000 seats, it can host all participants of the Kalamata International Choir Competition & Festival. A big stage is constructed especially for the official events of the choir competition, but there is still enough space for the participants to sing and dance together and celebrate the results. 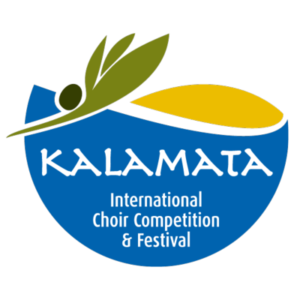